Category Archives: When Sparks are ignored

When Sparks are Ignored: Egotism 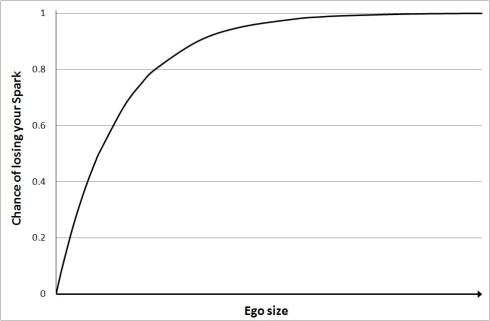 One of the greatest pleasures for a Spark is to reside in the brain of a human who has what people like to call a “small ego” – someone who thinks of themselves more as a part of something larger than as an individual. When a person with a small ego has an idea they are likely to attribute it to something outside of themselves (something they plucked out of the air as it was floating past). People like that are usually very receptive to the ideas of Sparks, and they often go on to become very successful people.

The trouble is that the size of a person’s ego can change, and in most cases when a person is successful their ego grows and before they know it their ego has well and truly taken over. They no longer think of themselves as part of something bigger, but think only of themselves. An egotist thinks that any ideas they have had were entirely their own creation – they not only start ignoring their Spark, they start denying it even exists. So, you can see why they might find that their Spark decides to leave them.

This is a common story – lived out by artists, business people and revolutionary leaders-turned dictators. At the start they recognize their small part in the world and long to do their best or something “good”. A Spark tunes into their longing and joins them and the ideas and energy start flowing. Then the person starts doing something well. If this is recognized it leads to success and then praise, which are both good fertilizer for growing egos. Then, just when the person has grown an enormous ego and the world is watching and waiting for them to perform, they lose their Spark.

You can imagine the feelings of helplessness that develop in this situation. Rage often follows. Then comes the decline, which usually includes humiliating attempts to cling to fame and/or power. Lies and murder are possible. The egotist watches their friends and supporters fleeing. You can imagine the loneliness and feeling of betrayal. Finally they are alone, and not part of anything anymore. As a final blow to the ego, the person may find that history remembers them for their desperate acts in the dying days of their power rather than for their initial good deeds and intentions.

The pattern of success driven ego growth followed by decline can happen on other scales too. It is a common cause of project failure because when egos take over people place more importance on getting things done in “their” way than on the success of a project and spend time arguing over unimportant details instead of cooperating. A similar thing happens between people who are fighting for the same cause but all want the victory to be “theirs”.

Good ideas don’t have to lead to egotism though. There are some people who are able to keep their ego small even when they have great success.  When these people have good ideas they realise that their inspiration came from outside of themselves. They attribute their idea to things such as the colour of the sky that morning, the song they heard on the radio and a conversation they overheard on the bus. Small ego people know that they cannot exist alone. They remember that they wouldn’t have been able to even feed and clothe themselves without the things other people have done. Even a billionaire needs to realize that they could not have generated that money on their own. Not only do they rely on a workforce that could probably find something much better to do if they weren’t slaves to their mortgage or “lifestyle”, but that the workforce relies on the rest of society. And just as everyone relies on other people for their survival, our ideas are also products of the same system. Acknowledging this is a strategy that cannot lose. Not only are you more likely to keep your Spark, but if you remember that you aren’t doing everything on your own then when things go wrong you aren’t on your own either.

Leave a comment   |  tags: Ego, Egotism, Small ego people know that they cannot exist alone, something they plucked out of the air as it was floating past, The Inkling, The Spark, they realise that their inspiration came from outside of themselves | posted in Uncategorized, When Sparks are ignored

When Sparks are Ignored: Lobotomies

Humans are capable of some brilliant things, but they can also do some really stupid things. Sometimes it is the most brilliant people who do the stupidest things, and sometimes it takes a while for everyone else to realise how silly these things are. Lobotomies are one example that causes particular pain to Sparks.

Lobotomies were developed in 1935 by neurologists Dr. Antonio Egas Moniz and Dr. Almeida Lima as a treatment for mental illnesses, including anxiety, depression and schizophrenia. If you were considered extremely emotional, difficult or moody you might also have been given a lobotomy. They were given to criminals, to problem family members and to patients who would otherwise have taken up hospital beds.

As you may know, when Sparks visit human brains they inhabit the frontal lobes. This is because Sparks are looking to interact with the intellect and because the frontal lobes are where all good ideas are formed. If you were to lose the function of your frontal lobes you’d be left with what is sometimes called the reptilian part of the brain. The reptilian part of the brain runs on reward and punishment. It is not capable of abstract thinking (like imagining the likely consequences of actions or understanding another person’s feelings or motives). Obviously if you lost the function of your frontal lobes you’d also lose the opportunity to be influenced by a Spark.

Many Sparks joined forces to try to stop the lobotomy craze taking off, but they weren’t successful because not all brains are receptive to Sparks and the type of people who sanctioned and performed lobotomies turned out to be the least receptive. The potential patients were far more receptive to Sparks, but they were also often powerless or overcome by other problems, and in the end there was just not enough time – most people seemed to want a solution that was convenient rather than good.

Instead, lobotomies were made even easier by Walter Freeman. The first lobotomies involved drilling holes into the skull on either side of the prefrontal cortex and injecting the connecting fibres with alcohol to destroy them. So that lobotomies could be given to more people, Walter Freeman came up with a technique that was faster, more accessible and less expensive. This involved getting to the prefrontal cortex through the eye sockets instead. His method has become known as the “ice pick lobotomy”, because he developed the technique using an ice pick and eventually used an instrument (orbitoclast) that resembled an ice pick.

The ice pick lobotomy could be done by non surgeons and didn’t require an operating room. It took around 10 minutes to perform. The patient was made unconscious using electroconvulsive shock instead of anaesthetic. The orbitoclast was pushed up through the top of one eye-socket. Then, after a light tap on the end with a hammer, the orbitoclast would break through the thin layer of bone and enter the brain. Next the fibres connecting the prefrontal cortex were then broken by twiddling the orbitoclast around a bit. The procedure was then repeated on the other side (via the other eye socket).

Sparks weren’t even able to stop Dr Moniz being given the Nobel Prize in 1949 for his lobotomy work. Things began to turn around when the USSR banned lobotomies in 1953, but it was really the invention of drugs as a replacement that meant that Lobotomies began to decline in the 1950s.

Some people were happy with their lobotomies, as some people are happy taking drugs today. But many people suffered and many died. Those of you who still have the connection between intellect and emotion may like to listen to Josef Hassid play the violin (pre-lobotomy) while reading about him and nine other notable lobotomy patients.

Every month or so The Spark will tell us about a different time when the good advice of a Spark was ignored.